The upscale hostel Freehand takes over a 1920’s art deco gem in Chicago’s River North neighborhood, outfitting it in 70’s décor, loads of artworks and one of the best cocktail bars in the city.

Calling the Freehand Chicago a “hostel” would be a little like calling Harry Potter a “kids’” movie: the description isn’t wrong, but leaves out a lot of what makes it so special. Freehand’s Chicago outpost has become the go-to for young travelers looking for an affordable-but-interesting place to stay in the Windy City, combining modern design and conversation-starting art in a space that dates back to 1927. The prohibition-era mafia hangout  is an art deco slice of history among the glass condo towers in River North; it  lets guests take a look back at what the city once was through a photo exhibit and its unique architecture.

This is the place to stay at if you want to meet people. Inside you’ll find guests, locals and discerning tourists packing the Broken Shaker, the landmark cocktail bar that’s regularly on lists of the city’s best. Though the bar acts as the Freehand’s social hub, you’ll also find digital nomads enjoying coffee from Café Integral while working in the avocado-green lobby, or guests making late-night snacks in the hotel’s communal kitchen. The Freehand has the look and feel of a hotel with the social amenities of a hostel, which might just be the perfect combination for someone looking to immerse themselves in Chicago.

A short walk from The Loop, Downtown and Magnificent Mile

The Freehand is in River North, which, as the name might imply, is the area just north of the Chicago River, directly across from downtown. Over the past couple of decades, modern condo highrises have shot up, filling the area with affluent, young professionals. Make no mistake, though, River North is still teeming in history, including the 1927 Devonshire Hotel which Freehand now calls home.

Assuming the weather is cooperating (a big assumption in Chicago) you’re a short walk from The Loop. Navy Pier, Magnificent Mile, tons of restaurants and even the theatre district. If the weather’s not cooperating, well, nothing is too far in a nice heated car either.

If you’re looking for the most notable and quintessential experiences in this city, see our Best Things to Do in Chicago guide.

Among the sights near the Freehand:

Despite its chic Roman and Williams design, swanky cocktail bar and high-speed WiFi, the Freehand is still a hostel. You can still bunk yourself up in a quad room for a rock bottom price, meet new friends and make your own dinner at all hours of the night. But the Freehand is also a cool hotel in a major city, meaning if you want to ball out and rent a two-story penthouse, that’s there for the taking, too. As are normal-sized private rooms, all with the unmistakable 70s motif that makes the Freehand so special.Prices begin at about $35/night for a bed in a shared Quad Room and, depending on the season, can go well over $1000/night for those interested in a penthouse lifestyle.

The 80 Quad Rooms are your traditional hostel rooms, with bunks sleeping up to four people and a shared bathroom. But don’t mistake them for shabby hostel dorms; the Freehand’s quads all come with colorful furniture and dark wood doors to keep each bunk private. The ensuite bathrooms mean you’re only sharing the WC with your roommates. And female-only rooms are available on request. Premium quads are also on the menu, which offer HD televisions and a mini bar.

The Freehand has 137 private rooms with king and queen beds, offering a private bathroom,  desk, alarm clock and HD cable TV. Make no mistake, they’re small and not designed for hosting or for families. They boast the same Roman and Williams design as the rest of the hotel, meaning they look cool but definitely won’t be suitable if you’re looking to spread out. Think hostel vibes, with a little more privacy, and you’re on the right track.

The two, two-story penthouses sit on the top floors of the Freehand, offering a 65-inch flat screen TV in the spacious living room as well as two bedrooms. One bedroom has four bunk beds, and the other has either a king or queen bed, making this the ideal choice for a family. You’ll also get either a gaming area or an oversized bathroom, plus the most privacy on the property.

Art, history and one of Chicago’s best cocktail bars

The Freehand makes sure to pay plenty of tribute to its history and the neighborhood it calls home. The building that was once the Devonshire, and later the Tokyo Hotel, has murals and pictures telling its story which can be just as fascinating as many art tours. Once you’ve grasped the history, you can readily enjoy the Broken Shaker, a cocktail bar that’s gained acclaim from more than just satisfied hotel guests. 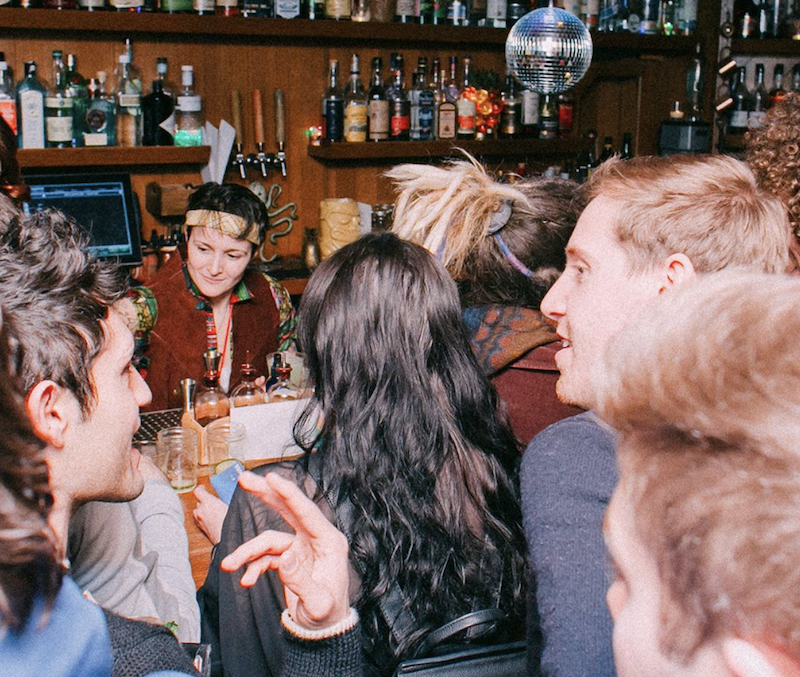 Easily the Freehand’s biggest attraction, The Broken Shaker is an acclaimed cocktail lounge that was named “Best Hotel Bar” at Tales of the Cocktail.  Here, you can sip on stuff like the Ginger Lavender Mule (basically a Moscow Mule with ginger, lavender, and Aleppo chili)or the Cure for Sanity (mezcal, amaro, honey, ginger, and lemon) all while mingling with a mixture of guests, tourists and cocktail aficionados from around the city.

Though we’d hesitate to call Cafe Integral a restaurant, it is still an ideal place to grab fresh Nicaraguan coffee and a pastry to start the day. It’s also the best place at the Freehand to bust out your laptop and do some work.  Unless you’re in the penthouse your room probably will feel too small for any serious productivity.

Also see: Our Best of the U.S. Bucket List series for all the notable and quintessential experiences in Chicago:

Best Things to Do in Chicago